fish that can live in bowl

can koi fish live in a bowl Koi Fish can definitely live in a fish tank. Koi are not typically small fish so you must accommodate them accordingly or they will die off quickly

Here is a list of best fish that can live in a bowl without a filter.

But personally, for me, I don’t recommend this bowl and small aquariums are troublesome to maintain you will need to frequently clean it since it can only hold small water and easily get dirty.

The Siamese fighting fish, or betta, is a vibrantly-colored fish often seen swimming solo in brandy sniffers and ornamental vases in both the office and home. learn betta fish care

Bettas are excellent also for this type of environment since bettas can breathe in the atmosphere.

How does the labyrinth organ work?

This organ allows labyrinth fish to take in oxygen directly from the air, instead of taking it from the water in which they reside through the use of gills. The labyrinth organ helps the inhaled oxygen to be absorbed into the bloodstream

Full Red Moscow
The guppy, also known as millionfish and rainbow fish, is one of the world’s most widely distributed tropical fish, and one of the most popular freshwater aquarium fish species. It is a member of the family Poeciliidae and, like almost all American members of the family, is live-bearing. learn more about different types of guppies
White Cloud Minnows-White Cloud Mountain Minnows are small, colorful fish, once termed the working man’s Neon because they compared to Neon Tetras in color learn more how to care for guppy

The Blind Cave Tetra is a very interesting fish from the physical point of view. It gets its name from its lack of eyes, a feature that makes it special.

The salt and pepper catfish is a tropical freshwater fish belonging to the Corydoradinae sub-family of the family Callichthyidae. It originates in inland waters in South America, and is found in the Upper Orinoco River basin in Venezuela and Colombia

The zebrafish is a freshwater fish belonging to the minnow family of the order Cypriniformes. Native to South Asia, it is a popular aquarium fish, frequently sold under the trade name zebra danio.

The ember tetra is a freshwater fish of the characin family of order Characiformes. It is native to the Araguaia River basin of Brazil and was discovered in 1987 and named in honor of the fish explorer Heiko Bleher’s mother

The dwarf pufferfish, also known as the Malabar pufferfish, pea pufferfish or pygmy pufferfish, is a small, freshwater pufferfish endemic to Kerala and southern Karnataka in Southwest India. It is threatened by overfishing for the aquarium trade, and by habitat loss.

The sixray corydoras or false corydoras is a tropical freshwater fish belonging to the Corydoradinae sub-family of the family Callichthyidae. It originates in inland waters in South America, and is found in the upper Araguaia River basin in Brazil. The fish will grow in length up to 2.9 centimetres.

-The scarlet badis is a tropical freshwater fish and one of the smallest known percoid fish species. It is a micropredator, feeding on small aquatic crustaceans, worms, insect larvae and other zooplankton. It is sold under a variety of names in the aquarium trade.

The proper ratio of a fish and space is 1 inch is to 10 gallons. so you need to just keep small species of fish for them to survive in a small space like a fishbowl.

Why choose Small fish? fish that can live in a bowl

I think this is pretty self-explanatory but small fish require less space and water since as what I said the proper ration is 1 inch of fish equivalent to 10 gallons of water.

Some nano species of fish like Scarlet Badis may be good options for bowls.

Scarlet Badis Overview
The Scarlet Badis (Dario dario) is a colorful, peaceful, fish from the Badidae family. It is also known as the Scarlet Gem Badis, and is one of the most underrated species of freshwater fish.

Even though this fish is becoming increasingly popular in the aquarium trade, there is still lots we don’t know about this fish. It remains one of the least studied Percoid fish.

The circle of life for this fish is quite brutal. You might find them dead without any apparent cause. Often, at the end of their life they will likely show bright coloration as the male tries to reproduce before it dies.

However with proper care and a good balanced diet, the Scarlet Badis will add bright colors to your aquarium for at least 3-4 years.

Remember, they don’t like polluted waters, so keeping the aquarium clean is an absolute must.

fish that can live in bowl people ask

Which fish can survive in a bowl? 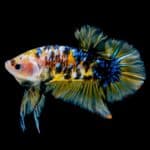 Betta. Bettas, sometimes called Siamese fighting fish, are one of the most common tropical fish kept in bowls. Although they can survive in them, a bowl is not ideal for their health. They get their nickname because males will fight to the death if they are left in a tank together

What is the easiest fish to take care of?

Neon Tetra. Swarm of Neon Tetras.
Guppies. This colorful and lively fish is able to adapt to a variety of water conditions which is one of the reasons they are so popular.
Oscar.
Mollies
Zebra Danios
Platies.
Cherry Barb.
Pearl Gourami.

Is it bad to keep fish in a bowl? 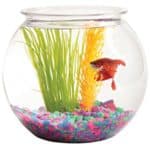 Ironically, fish bowls are not suitable homes for aquarium fish, whether they’re goldfish or bettas or any other animal. The higher the ratio, the more oxygen will dissolve into the water, allowing the fish to breathe more easily.

What fish can live without a filter?

None. You may be able to keep the fish alive, but they won’t thrive. Without a filter, the ammonia produced by fish waste stays in the water, and it toxic to fish. It’s true that bettas breath from air, but they are still burned by ammonia.

So, no. They aren’t cruel, unless the keeper is cruel, by society’s definition. Just Like has been said many times as long as you take care of your fishes water, fish compatibility, proper tank size and don’t starve them i dont think its cruel at all.

3 Gallon Plastic Fish Bowl. If you’re looking for an inexpensive goldfish bowl that is large enough to hold a good bit of water

What fish can live in a small fish bowl?
Betta. Bettas, sometimes called Siamese fighting fish, are one of the most common tropical fish kept in bowls. Although they can survive in them, a bowl is not ideal for their health. They get their nickname because males will fight to the death if they are left in a tank together.

How do I start a small fish bowl?
How to Set up a Fish Bowl
By Josh Day.
Obtain your bowl or vase. …
Try to gather some cultured gravel. …
Plant your base with some forgiving, easy aquatic plants. …
Fill with dechlorinated water. …
Add fish. …
Feed fish a small amount of food every day. …
Change out a cup of water every day, or every other day.

fish that can live with a betta in a bowl

where to buy fish bowls