Goshiki. Goshiki was created in 1918 by breeding Asagi with Kohaku koi. translation of Goshiki is “five colors” and this koi truly shows a rainbow of colors. The black, blue, and grey colors appear in a reticulation, or a netted pattern, across the white and red and Kohaku like body.

The name Goshiki literally means “five-colored,”referring to the white, red, light blue, dark blue, and black coloration of these koi.

There may even be a sixth color evident, when a blue area is overlaid by black, creating a purple shade.
There is considerable variability between the koi of this group.

The traditional form is relatively dark in color, but over recent years, some strains have been developed on much more colorful lines.

Goshiki are now generally classified with Koromo, but were traditionally included in the Kawarimono

Goshiki was created in 1918 by breeding Asagi with Kohaku koi. translation of Goshiki is “five colors” and this koi truly shows a rainbow of colors.

who is best breeder of goshiki koi in japan 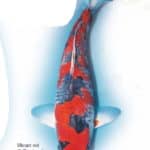 Kenichi Wada
This time we interviewed Mr. Kenichi Wada of the Minuma Koi Farm, which is famous for their Goshiki breeding. The Goshiki variety has been gaining popularity, as has the Gosanke and Shiro Utsuri varieties, due to their distinct Hi patterns.

If you want learn more about other types of koi