A koi with Hi and Sumi markings on white skin is defined as “Taisho-Sanke”. Its basic pattern is a Hi marking on the head and black stripes on the pectoral fins.  It is a representative class together with the Kohaku.

• White, or shiroji (sheer-row-gee), is the base color on Sanke. It begins at the nose and continues to the tail, including the fins. It should be clean, bright and not discolored in any way.

• The red on Sanke is called hi (he) or beni (ben-ny) in Japanese. Beni tends to be more of an orange shade rather than a true, fire engine red. Sanke usually have large, reddish-orange patches that form the foundation of their color pattern, with the white base generally visible between the patches of beni.

• Black, or sumi (sue-me), is the rarest color on Sanke. Generally, Sanke will have black spots, or sumi markings, that are relatively small when compared to the prominent beni patches. Sumi can be thought of as an accent color, while beni and shiroji are the primary colors on Sanke.

It is not clear exactly when and how a tricolor black white and red koi had been bred, but it was found in the middle of the Meiji era. The first Sanke had black, white and red markings apart from one another all over the body and is distinguished from the present Taisho-Sanke. It ws Mr. Eizaburo Hoshino of Takezawa who bred the Taisho-Sanke with red and black markings on white skin.

Later it had been greatly improved and splendid Sankes as “Jinbei” “Torazo” and “Sadazo” were bred.

White skin The texture should be snow white.

Hi should be uniform and dark. Clear edges are important.

The head Hi should not spread over the eyes, jaws and cheeks. Hi should not cover the nose, either. A white part is necessary on the tail region. Symmetrical Hi pattern is desirable, Fins are not colored red.

It is ideal that a fin has about three black stripes. A fin with fewer stripes looks more elegant than that with many stripes.

It is a Taisho-Sanke of which red marking spreads from head to tail. It is impressive but lacks elegance

It is the Taisho-Sanke with silver lumps on the head.

KAWARIMONO (ALL OTHERS)(no metallic koi allowed) We finally get to … This group includes Kanoko Kohaku, Kanoko Sanke and Kanoko Showa.

Budo Sanke: A Koi with a pattern resembling that of Budo Goromo combined with solid … Goshiki Shusui: A doitsu, non-metallic blue Goshiki (Kawarimono).

In this variety, also known as Metallic Sanke, individuals with the richest red
and black markings are favored.

Here’s an article from Koi net about Sanke Vs Showa

The Kohaku, Sanke and Showa varieties of koi are collectively known as the gosanke. In this case the “go” does not mean five, but refers to three noble Japanese families.

The highest quality of skin and colour is to be found amongst the gosanke and for this reason grand champions are usually selected from these variet­ies.

A Kohaku is a white koi with red pattern markings while Sanke and Showa are three coloured koi; red, black and white.

Showa and Sanke appeal to all types of hobby­ists, especially those who want to show their koi and compete for top awards.

It is not easy to raise a koi with three colours of high quality, but for those that can achieve this feat, there is the possibility of having a grand champion.

Hobbyists and even benching teams sometimes have difficulty in deciding whether a koi is a Sanke or a Showa. It is often said that a Sanke is a white koi with red and black pattern markings and a Showa is a black koi with red and white pattern markings. It is true that when breeding Showa the all black fry are kept at the first cull. However, this does not help to distinguish larger koi exhibiting all three colours.

In his book, Dr Takeo Kuroki referred to Mr Eziburo Hoshino as being the first to breed Sanke while Peter Waddington credits Mr Kawakami (Torazo) as being the first to breed Sanke in 1915. The Sanke variety has its ori­gins in the reign of the Japanese Emperor Yoshihito and the period of his reign (1912 —1926) was known as the Taisho era. Taisho means “great righteousness”. Sanshoku means three colours and the proper name for a Sanke is Taisho Sanshoku or Taisho Sanke, which is com­monly abbreviated to Sanke.

The proper name for a Showa is Showa Sanshoku and this variety was developed a little later in the Showa era of Emperor Hirohito 1926 —1989. Showa means enlight­enment and harmony. Jukichi Hoshino has been credited with breeding the first Showa in 1927 using a Ki Utsuri as one of the parents. These early Showa were of poor quality and it was not until Tomiji Kobayashi crossed Showa with Kohaku in the 1960’s that the high quality Showa we recognise today were created. learn more https://www.koinet.net/j/index.php/19-home/159-showa-or-sanke.html

What does Doitsu mean in Koi?

Doitsu refers to the scalation, or in this case lack of. Doitsu means scaleless or in some cases, scaleless body, but rows of oversized scales on the top and side of the koi

What are the different types of koi?

As Butterfly koi grow, they become more and more impressive because the fins keep growing until the blood vessels can’t sustain the fins to be any longer.

Butterfly koi seem to lack some of the body size of regular koi, but the overall fish can run as long as 36 to 40 inches in the right pond with plenty of food.

What type of fish are koi?

Koi fish is domesticated version of common carp. This fish is most famous by its beautiful colors that have been created via selective breeding. There are over 20 different varieties of koi fish that differ in color, patterns and type of scales.

Learn other types of koi

difference between showa and sanke koi

, what is the difference between showa koi and sanke koi,

kanako sanke koi, how much is a 30 inch sanke koi fish,

, how does color develop in sanke koi,

What is Gosanke koi?

Gosanke (goh-SAHN-keh) is a classification of koi fish that is comprised of three subcategories that includes Kohaku, Sanke and Showa. … This group remains the most popular choice for enthusiasts and is usually one of the first types of koi fish to find its way into a pond or tank

where are sanke koi found in japan 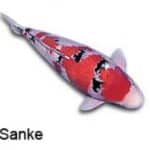 the Sanke (also known as a Taisho Sanshoku). This tri colored Koi (white body with red and black markings) was first seen in 1868-1912. In 1915, a 15 year old Sanke variety Koi was displayed for the first time. In 1927  Taisho Sanshoku, also called Taisho Sanke and Sanke, were developed from Kohaku about 80 years ago in 1918 in the era of Taisho

how to pick show sanke koi

There should not be any red in the fins, lJl1less very tight to the body. Be careful choosing a young sanke with many black stripes in the pectoral fins. These sometimes develop too much black at a later stage. Again, as in all koi, look for broad shoulders and large pectoral fins for good growth potential