asagi koi The Asagi is one of the oldest breeds of the beautiful koi. Stoic and subdued, and sometimes even considered an acquired taste

Asagi is a fully-scaled, nonmetallic fish with a long history, but because they closely resemble Magoi(the wild black carp) some hobbyists see them as unrefined, dull, and not “proper” koi at all. Certainly, they are an acquired taste, fairly removed from the brilliantly tricolored modern Showa or the flashy koi grouped in Hikariutsuri. But their quiet elegance serves as a counterpoint to their more exotic pond mates and they also have the potential to grow very large.

The Japanese recognize three types of Magoi, one of which, the Asagi Magoi is the forerunner of all modern koi. Its back is bluish, with a reticulated scale pattern and some hi is present on the cheeks, flanks and pectoral fins About 160 years two mutants arose from this proto koi namely the konjo and the Narumi Asagi Although instrumental in the development of Matsuba koi the dark konjo asagi are valueless in their own right except as food fish, However, Narumi Asagi have gone on the become one half of a recognized judging variety the other being their Doitsu counterparts Shusui

This unmistakable variety, whose ancestry dates back over 160 years, is distinguished
predominantly by the bluish, scaled pattern over the back, with reddish areas on the fins and on the sides of the head.

Symmetry in appearance is highly valued in these koi. Asagi with“Doitsu” scaling are known as Shusui, while there is also a colorful red (“hi”) form in which blue coloration is
overlaid with red.

asagi koi grey and not white why?

The Asagi is one of the oldest breeds of the beautiful koi. … just like your typical Asagi, but they have an additional line of white scales between its red and blue pigmentation. However, these koi most often have grey-toned heads. … If you have a young Asagi koi whose scales seem lackluster, don’t worry.

The history of Asagi

The prefix “Narumi” is derived from the town of the same name in Ichi Prefecture, where a locally made fabric was said to resemble the pattern on the backs of these koi. Asagi seem to have appeared all over Japan, not just in Niigata this at a time when interest in mutant fish led to their being kept back from the food crop and bred together for curiosity’s sake, long before koi was seen as a commercial proposition

These two varieties of koi carp are often referred to as ‘blue koi’. Asagi date back 200 years as one of the original types that came from the Magoi. Magoi is a black common carp that the many koi variations have been mutations of

The narumi asagi is a koi with a darker blue background of uniform scales with reticulation in a lighter blue. Most modern asagi are developed from this strain.

Because they breed relatively true, countless ordinary grade Asagi are produced each year, and newcomers to koi can gain an unfavorable impression of the variety because really good examples are so seldom seen. Ideally, the back should be evenly covered in scales that are pale blue where they enter the skin. but with a darker edging, not the other way around, as is sometimes stated. The sharper the definition between these two shades, the more impressive the koi will

The Asagi koi is blue-grey fish with dark blue lines running along the edges of its scales to form a spectacular net-like pattern. Additionally, it has a red hue below its lateral lines and sometimes on its fins and belly. The Asagi is one of the original kois, tracing its origins to as far back as 1850

The name “asagi” in Japanese translates to “setting sun” and this breed’s coloring is … asagi, I highly suggest keeping all these characteristics in mind.

The base of the pectoral fins, tail fin, stomach and gill plates is a deep orange or red color.Viewed from above

purple asagi koi It is a very dark asagi, almost blackish to purple in color. Both types of asagi originate from the asagi magoi, which has a blue reticulated back

The greater the contrast, the higher the quality of Asagi you have. Red or orange pattern will then appear below the lateral line. Shusui. Shusui koi are

Asagi koi have a blue/grey pattern on their back that resembles netting. Hi, or red colouring seen in many koi fish patterns, will grow upwards from the bottom

The Asagi is one of the oldest breeds of the beautiful koi. Stoic and subdued, and sometimes even considered an acquired taste, you’re sure to

Konjo Asagi (which has dark-blue … Asagi koi have red below the lateral line to the under side, often some red on all fins

my asagi koi looks grey and not white why? 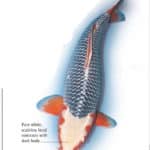 Color loss in koi can be the result of any number of causes.Asagi & Shusui types of pigment cells, while white is the absence of any chromatophores. Your koi’s diet is important to, not just your koi’s overall health, but its So she might not look her best after being badgered and made to lay eggs.

what to feed asagi koi

How do you pick Asagi Koi? 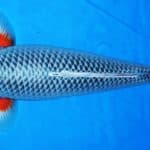 When choosing Asagi koi for your pond, the best ones will not have any hi past the fish’s lateral line. The top of the head (forehead) on an Asagi should be clear of any markings and should be white or a pale blue. Colour on the head should be restricted to the cheek area and nose.