1.) The red and white color meaning of koi fish in the paintings usually kohaku koi fish

Red koi symbolizes true love while white on the other hand is a symbol of progress in career.

So, a painting with red and white color koi fish like Kohaku koi will result in perfect
balance and harmony in your family as well as professional life.

In Buddhist symbolism the lotus is symbolic of purity of the body,
speech, and mind as while rooted in the mud, its flowers blossom
on long stalks as if floating above the muddy waters of attachment and desire.

In Egyptian iconography, the sun bursts from the open blossom. It is the archetypal vulva.

In Hinduism as in Buddhism, the lotus is associated with the birth of divine beings. …

In Buddhism, the lotus represents purity because its flower rises
above the vase like the Enlightened One above the world.

6.) a gold-colored koi or yellow color in koi fish paintings. These gold-colored fish symbolize fortune and wealth. The Japanese term for them is yamabuki.

7.) Koi Fish Jumps Over the Dragon’s Gate Painting: from a long legend in China. (?????) Symbolize big success in the civil service examination or getting a big promotion. 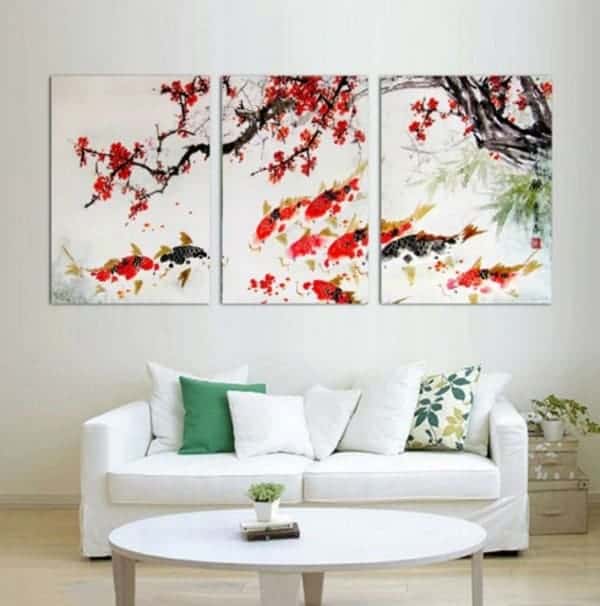 Buy this koi fish paintings with cherry blossom here
of the cherry blossom tree in Japanese culture goes back hundreds of years. In their country, the cherry blossom represents the fragility and the beauty of life. It’s a reminder that life is almost
overwhelmingly beautiful but that it is also tragically short.

9.)Three(3) Koi Fishes Painting: symbolize “having advantages again and again”. If you put the picture in your house, it can bring your family benefits/profits.

10.)The pair of golden koi fish, koi (carp), represents abundance and wealth. It can also be used as a fertility symbol since carp procreate very rapidly.

Pairs used in feng shui are considered very auspicious symbols for
marriage. Traditionally, a pair of koi represents the sexual unity
and fidelity of a married couple and are often given as a wedding gift.

The sides of black and white are said to resemble a female and a
male koi swimming together, representing the harmony of two
opposite energies coming together as one, creating a perfect balance.

In Taoism, yin and yang further symbolize the dueling
sides of all things and the perfect balance and harmony of them.

What do koi fish represent in dreams?
Koi Fish Dream Meaning and Interpretations. Koi Fish Dream Symbol – Koi fish swims into your dreams to remind of friendship, affection, and love. Her message maybe it is a time to act without pride or ego as this may alienate those you care for.

How many koi fish is good luck?
The typical number for Koi fish in a feng shui aquarium is 9 (8 brightly colored koi and 1 black koi fish).

The blackfish is there to neutralize bad luck. You can also find feng shui cures with 2 koi fish, this being a feng shui cure to attract love and fidelity.

A black fish, called Kumonryu, is named after the Japanese dragon of transformation and is said to signify upcoming life changes.

Ogon, the platinum colored Koi, symbolizes the fulfillment of wealth via success in the business world.

What does the koi symbolize?
Swimming koi represent advancement and determination. Fish in general symbolize wealth and surplus, and the Chinese believe koi particularly represent good fortune in business and academics.

Buddhists on the other hand see koi as representations of courage. Together in a koi pond, they represent love and friendship

Koi Fish meaning in Japan is good fortune or luck they also are associated with perseverance in adversity and strength of purpose, the Koi fish symbolize good luck, abundance and perseverance.

Symbolic in Buddhism is to represent courage.Based on that legend, it became a symbol of worldly aspiration and advancement.

What do koi fish symbolize in Chinese culture?
Koi Fish Meaning by the Chinese
Carp was considered a symbol of strength. Koi are constantly swimming upstream and against the current, because of this their image is used to represent strength, independence, perseverance, ambition and good luck

The symbol in A Silent Voice being the koi fish. The koi fish are shown A LOT throughout the movie and are even important enough to be shown in a poster or wallpaper for the movie.

The legend states that there was a group of koi fish at the bottom of a waterfall in the Chinese Yellow River.

In its common nature, the Koi fish have a special unique inherited ability to swim upstream. Hence, it has been a symbol of strength and courage.

According to the Chinese and Japanese ancient legend, there were a large school of Koi fish swimming up to the Yellow River in China

Koi Fish meaning in Japan is good fortune or luck they also are associated with perseverance in adversity and strength of purpose, the Koi fish symbolize good luck, abundance and perseverance. Symbolic in Buddhism is to represent courage.

The legendary koi transforms into a golden dragon. This colour choice represents wealth, prosperity, and fortune. Yellow . The legend Japanese , the yellow and golden koi are symbols of wealth and prosperity.

In Japanese culture, mothers, fathers, sons, and daughters are all symbolized by different-colored koi fish.

A pair of fish is also one of the Eight Buddhist Symbols. Koi fish (in trad. Chinese: 錦鯉魚), either black or red, also symbolizes wealth and success. As with most Chinese symbols, the carp has a legend attached to it.

In Japan, the red koi symbolizes the female figure in the family. As a tattoo design, it represents passionate love. A red koi have some of different meanings. It may be a symbol of intense love, motherhood, power, strength, or bravery.

koi fish symbolism for the afterlife

According to Japanese mythology, koi fish are sometimes reincarnated as dragons in the afterlife. A combination of a koi fish and the dragon tattoo represents changing or transforming – In particular, the person is looking forward, or welcoming a huge change in his life.

The blue koi fish is often associated with masculinity and fertility. a symbol for the son of a family, the blue koi also meaning peace, serenity, and calmness.

Koi Fish meaning in Japan is good fortune or luck they also are associated with perseverance in adversity and strength of purpose, the Koi fish symbolize good luck, abundance and perseverance. Symbolic in Buddhism is to represent courage. … Based on that legend, it became a symbol of worldly aspiration and advancement

Black symbolizes great adversity, the black koi fish is used to represent adverse struggle to succeed. It can be a story of rags to riches, a symbol of surviving a battle and coming out alive. Whatever hardships one has to go through to get to the point they are now can be represented by this tattoo. Dragon Koi Tattoo.

Koi fish are also a common subject in tattoos. According to most tattoo artists, koi fish represent strength, prosperity, determination, independence, perseverance, and good luck, among other things. All of this is based on the huge amount of reverence and respect that the Japanese people have for the humble koi fish.

what do koi fish symbolism

what does the koi fish symbolism

Symbolic Meanings
So it comes as no surprise that koi are often associated with strength of character, perseverance, accomplishment and courage. The fish also symbolise good fortune, success, prosperity and ambition. Their long history and hardy nature has also led to koi being associated with longevity.