Showa koi fish
Showa are one of the Gosanke or “Big 3” koi fish along with Taisho Sanke and Kohaku koi. Showa are beautiful koi, with colors of white, red, and black painted

The stunning Showa koi fish fist came about in 1927, but the coloring did not reach its current perfection until 1965. After thirty six years a

A koi with Hi and white markings on black skin is defined as “Showa-Sanshoku” The joints of its pectoral fins are black (Fig. 4-24)

The Showa-Sanshoku was bred by Mr. Jukichi Hoshino by mating a Ki-Utsuri and a Kohaku in 1927. Hi color of the first Showa-Sanshoku was yellowish brown. Mr. Tomiji  Kobayasi succeeded in producing real red Hi by using a Yagozemon-Kohaku. Then it has become one of the best kinds.

It is necessary to have a big Hi marking on the head. Hi should be uniform and dark Its edge must be clear.

About 20% of white is desirable. The color should be snow white

White marking are necessary on the head, the tail joint and the back.

a marking on the nose (Fig. 4-26). The former is the original type. The latter is more impressive than the former.

Both the Taisho-Sanke and the Showa-Sanshoku are tricolor white, black and red. The former has red and black markings on white skin, but the latter has red and white markings on black skin. The following items are the distinctive features.

Every Sumi scale the Showa-Sanshoku looks relieved clearly, but Sumi of the Boke Showa is blurred and light.

Boke In the normal Showa, the Sumi must be coal black but in the Boke it is blurred and bluish in places as though the black had not made it to the surface of the Koi (which is just what has happened).

It is the Showa with a large Hi marking which spreads from head to tail.

It shows many white parts and looks like a Taisho-Sanke at a glance.

It is the Showa of the Doitsu family.

blue-bordered scales. They have the Sumi of the Taisho Sanshoku (Hon Sumi) as well as the Ai of the Koromo(Koromo Sumi). – Ai Showa or Goromo Showa

Kawarimono or Kawarigoi as they are sometimes called is a catchall class for all of … This group includes Kanoko Kohaku, Kanoko Sanke and Kanoko Showa.

Kawarimono or Kawarigoi as they are sometimes called is a catchall class for all of the … They include Kage Shiro Utsuri, Kage Hi Utsuri, and Kage Showa.

KAWARIMONO (ALL OTHERS)(no metallic koi allowed) We finally get to the … Hybrids of two varieties include Showa Shusui and the Goshiki. Koi of the Karasu

Kin Showa. Kin Showas are a metallic version of a regular Showa. A good Kin Showa will have a nice balance of color. The pattern must be easy on the eyes and the should sharp edges between the patterns. Kin Showa are created by breeding a regular Showa and a Platinum Ogon.

Hikari Utsuri variety are koi like Kin Showa, Kin Ki Utsuri, Kin Hi Utsuri, Gin Shiro Utsuri. What is common here is that they are all metallic

Hi Showa Red (“hi”) coloration predominates in this variety, although the white body color can still be seen.

Kinginrin stands for golden silvery scales. The fish are highly appreciated because of the glittering effect in the sun and therefore always stand out among the other koi. One speaks of Kinginrin when the koi has at least 20 scales. Ginrin occurs in almost all variants. learn more

What makes a good Showa Koi?
Showa is koi type with combination of a good Kohaku and a good Shiro Utsuri koi type. Showa go through many changes as they grow.

Many times the black is very deep and only comes out as the fish grows. For this reason, if you see gray areas, it might not be poor quality white but deep black that will appear later.

What is the difference between a Showa and Sanke?
Look It in the Face.
The most obvious difference between the Sanke and Showa is the presence of sumi on the head. Generally, Sanke will have only two colors on its head — white and red, with no sumi present. … In contrast, you should see all three colors, including black, on the heads of Showa

What is Grade A koi?
Koi grades mean nothing.
It means that you’ll have to hand-select the koi for your pond, since you can’t trust any Koi distributor to choose your koi for you by their own grading criteria

yellow showa koi fish– usually the yellow color of showa when they are young will change to red or orange once they matured The Yellow koi fish meaning These gold-colored fish symbolize fortune and wealth. The Japanese term for them is yamabuki. koi symbolizes true love while

Swimming koi represent advancement and determination. Fish in general symbolize wealth and surplus, and the Chinese believe koi particularly represent good fortune in business and academics. Buddhists on the other hand see koi as representations of courage. Together in a koi pond, they represent love and friendship. learn more about koi fish meaning

What does a koi fish tattoo represent?
Swimming koi represent advancement and determination. Fish in general symbolize wealth and surplus, and the Chinese believe koi particularly represent good fortune in business and academics.

Buddhists on the other hand see koi as representations of courage. Together in a koi pond, they represent love and friendship.

How do you pick a good Koi Showa? 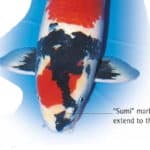 Start selecting a young showa, as with other young koi, by looking at the head. The head should have all three colors: red, black, and white, preferably in equal amounts. Best would be to have a good kohaku head with a lightening stripe or a Y -shape in black on the top of the head.

How do you breed Showa Koi? 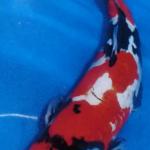 To breed showa cross showa with showa. at about three days post hatch keep only the black fry. These black babies will be the potential showa babies although only a few will turn out to be anything identifyable as showa. Only type of koi harder to breed than showa is Sanke

What makes a good Showa Koi? 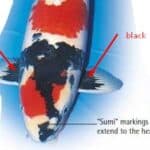 Ideally Showa Koi , almost all of the pectoral fins, except for the outermost tips, should be black. As the pectoral fins grow out, the black seems to stay the same and the white area on the outside seems to spread out. … Red is not acceptable in the fins. Pectoral fins should have Sumi at the base, up against the body