ogon koi fish Ogon koi are a single solid colour with a metallic appearance. This variety is very popular, particularly with those new to keeping koi.

A golden koi is defined as “Ogon”

It was bred by Mr. Sawata Aoki and his on in 1946. First he found a koi with golden lines on the back and made it a parent.

He chose the best golden koi one generation after another. In the fourth or the fith generation a Kin Kabuto golden headed koi and a Sakin gold dust koi were breed.

Mating them with a female Shiro-Fuji (White Mt. Fuji) a golden koi was finally bred. Being hybridized with other species, the Ogon is an Origin of many kinds of the Hikarimono.

Sawata Aoki, a Niigata peasant.In 1921, Mr. Sawata was walking along a mountain path toward the river, carrying his lunch, when he met up with a boy who had caught a carp with golden scales on its flanks.

Sawata was so deeply impressed that he bought the fish at the first price asked.

He spawned the fish and selected from the offspring the ones with the most golden color.

After four or five generations, he had produced ones with golden heads, silvery heads, and other varieties.

He purchased more breeding stock until he became too poor.He wanted a new breed known as gin-fuji, but the price was 60 yen, the cost of a large bag of rice.

That was too expensive for him.If he had bought the fish, his family would have gone hungry.

Knowing her father’s troubles, his daughter left home to work as a health nurse for six months.

Upon returning home, she gave her father her salary of 60 yen to purchase the parent fish.

From the spawnings that followed, two ogon with an entirely golden, shiny body were produced.

“It was just after the end of the war World War II) and food was scanty, however, his family supported him to feed the koi by reducing their own food.

In spite of rain or wind, Mr.Sawata went to and from the pond with an empty stomach to feed the koi with locusts that he had caught and crushed with his teeth.

After many years of effort, at the age of 74, he finally succeeded in producing the ogon.

In 1963 Mr. Tado Yoshioka of Uozu city-bred a koi as shiny as platinum, mating a Ki-goi with a Nezu-Ogon.

It was bred by Masoka in 1957, a Ki-goi and an Ogon being mated. The fish shines like pure gold.

It is an orange Hikarimono which was first bred in 1956

It is red Hikarimono. The points for appreciating Plati-num Ogon and Hi-Ogon are the same as those of the Ogon.

It is especially important that their heads are clear and their scales have shiny trimmings.

In 1960 Mr. Eizaburo Mano bred a Kin-Matsuba by mating a Matsuba with an Ogon Every scale is brilliantly embossed. The Matsuba with platinum texture is “Gin-Matsuba”

It is the Ogon of the Doitsu family.

It is the Platinum-Ogon koi fish of the Doitsu family

It is the Orange-Ogon of the Doitsu family

It is the Orange-Ogon with shiny black scales on the back.

It is rubbish of the Ogon koi fish, Most of these kind are culled and thrown away.

These are also rubbish of the Ogon. Their back shine golden or silver on black texture.

Ogon koi are a single solid colour with a metallic appearance. This variety is very popular, particularly with those new to keeping koi.

These fish can be a variety of attractive colours. Cream specimens are rare and the most popular choices are bright yellow (Yamabuki Ogon) and Platinum (Purachina Ogon).

What is a ghost koi?

Ghost Koi has human face! … A cross between a Koi carp and a wild-type mirror carp, Ghost koi are known for their hardiness, big appetites and, above all, growth. But a Koi is only worth what someone will pay for it – and for a Ghost koi even less.

How do I identify a koi fish?
These fins are more pointed than round female fins. You can also identify a koi’s gender by examining the vent area on the underside of the fish.

What does a green koi fish mean?
Red is taken as an energetic color so the tattoo is typically an expression of masculine love. … The Black Koi Tattoo. Black symbolizes great adversity, the black koi fish is used to represent adverse struggle to succeed. It can be a story of rags to riches, a symbol of surviving a battle and coming out alive.

Do koi fish stay small?
Koi can grow up to 2 to 3 feet or longer. Pool size, food, the number of fish sharing the space, the age of the fish and water quality can all affect a koi’s growth. Before setting up a koi pond, you should consult a seasoned koi pond builder to ensure you are setting the environment up correctly

What is an Ogon Koi?
Ogon koi are a single solid colour with a metallic appearance. This variety is very popular, particularly with those new to keeping koi.

These fish can be a variety of attractive colours. Cream specimens are rare and the most popular choices are bright yellow (Yamabuki Ogon) and Platinum (Purachina Ogon)

Jump to Yamabuki Ogon koi fish – are koi of a solid, metallic-yellow color. As with other Ogon koi, a clean, unblemished head and body are important. Variations of …
‎Showa Sanshoku · ‎Tancho

Since Mr. Sawata Aoki produced the first Ogon in 1947, a number of breeders have produced various Hikarimono based on the Ogon. Ogon

Ogon koi fish
Since Mr. Sawata Aoki produced the first Ogon in 1947, a number of breeders have produced various Hikarimono based on the Ogon. Ogon, meaning Gold, belongs to the Hikari Muji group. Ogon is a solid color metallic koi, from silver to gold and shines beautifully in a pond.

How to Judge an Ogon
A prize winning Ogon ideally is a bright metallic koi without any blemishes and an even pattern of scales. It should have no markings on the face either. They are bread in huge numbers and competition is fierce!

Ogon are one of the most friendly koi. Your family can hand feed these friendly koi and they absolutely love to eat! They will grow well and be some of the happiest and most beautiful koi in your collection.

Origins of Ogon Koi
In Edo period, gold, silver, coral, and Aya Nishiki (figured brocade) were considered the four national treasures.Of course the people would like to have their koi just like the treasures! In the middle of Taisho period (1912-1926), some kids were playing by a brook and they found and caught a black carp that had a slight shimmer on its back.

Sawata Aoki was the one who quickly focused on this shine on a carp. He thought “how amazing is that if I can create a Koi that its entire body shines as a gold”. His effort begun from then, and in 1947, he eventually succeeded creating a Ogon Koi.

Koi breeders created the varieties Ogon as a gold, Platinum Ogon as a silver, Kohaku as a coral, and Yamato Nishiki as Aya nishiki. They got their wish to have these living treasures, and if you got into the Koi world even only one step, you would fall in love with them immediately!

Learn more other types of koi 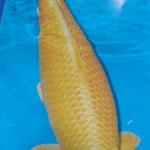 Ogon (meaning “golden”) koi are metallic, solid, single-colored koi fish in the Hikarimuji class (Hikari – “shiny”; Muji – “one”). Ogon has become synonymous with a collective name for metallic, solid-colored koi. … Having them in your pond is a good way to encourage shier koi to hand feed.

How big do Ogon Koi grow? 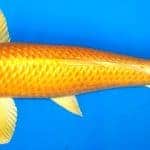