Astronomy is so fascinating that thousands of people have taken it up as a hobby.

Constellations are patterns of stars named after what the pattern looks like or a mythological figure. There are lots of interesting things to learn about constellations and the stars within them.

So take a look at the top ten most interesting facts of the Pisces constellation, and learn all about this fascinating zodiac sign.

So to find the stars in Pisces, you have to be looking at a certain time and from a certain angle. In fact, it can only be seen from the northern and southern hemispheres.

To find Pisces, just look towards the north quadrant in the west in the night sky and look for the circlet of Pisces. The Circlet is one of the fish in the constellation.

In Greek mythology, Mother Earth, or Gaia gave birth to a giant monster with one hundred snakeheads. Each snake head could shoot fire from its eyes and was sent to destroy Mount Olympus to kill the gods.

Typhon was sent to Mount Olympus because Gaia was angry that the gods defeated her children: the Titans.

The gods Aphrodite and her son Eros saw Typhon approaching, and turned into fish to run away from Typhon. They tied a rope to each other’s tails so they wouldn’t be separated.

Their plan worked, and they made the image of two fish tied together by rope appear in the night sky to celebrate, forming the constellation Pisces.

Different cultures also have their own myths about the Pisces constellation. Some even consider the constellation to represent koi fish, a species that has many myths surrounding it.

Stars aren’t the only things found in constellations. Constellations also have galaxies, and just above one of the stars in Pisces is a galaxy called the M74 galaxy.

It’s a huge galaxy that is estimated to contain 100 billion stars. It’s notable for having two perfect spiral arms and is a good example of a grand design galaxy since its shape is so textbook.

It’s also one of the hardest galaxies to spot for amateur astronomers.

In science, a supernova is when a star explodes and usually takes a planet or two with it. However, there are rarer instances of a hypernova, which are even bigger explosions, and cause massive bursts of gamma radiation.

Two of these occurred in the M74 galaxy, as early as 2002, giving scientists a chance to observe a recent hypernova.

Piscids haven’t been documented well since there only tend to be 5 meteors passing by per hour, and they’re hard to see, just like the Pisces constellation.

It’s also the first white dwarf to be discovered to not be part of any other star systems. Meaning that it’s relatively isolated in the solar system.

The star is named after the astronomer who found it in the 18th century. Fortunately, we’re well past the times where you had to discover a new star to name it after yourself.

Visit this page to learn more about how you can name a star after yourself.

Eta Piscium, the most luminous star in the Pisces constellation, doesn’t give off a lot of light. However, it is a binary star, meaning that it’s actually two stars.

Binary stars either have one star revolving around the other, or two stars revolving around a point. However, they are often referred to in the singular because of their closeness to each other.

The star RZ Piscium is one of the stars in the Pisces constellation. It’s one of the younger and more volatile stars, which means that their solar system is unstable, and the changing gravity of the sun is pulling objects like planets into itself.

Everything in the universe is constantly moving. Recently, this movement has caused the Vernal Equinox, the point in the sky where the sun crosses the celestial equator, to pass through Pisces.

The Sun used to pass through the Aries constellation but now passes through Pisces.

The planets are estimated to be at least 1.5 and half times as dense as Earth but have a lot more mass.

Pisces Is A Fascinating Constellation

The Pisces constellation is full of wonderful quirks and strange events that don’t happen often elsewhere in space.

But to really compare it to other constellations, you’d have to read up about all the other zodiac constellations too. Once you have, you’ll be an expert in everything about constellations.

You might even gain insight into your friend’s star signs if you’re into astrology too. Learning about constellations is great for learning about what the future holds according to the astrological conventions.

If you want to learn more interesting facts about fish and the culture around them, check out our blog.

Where can you see the Pisces constellation?
Roll mouse over to see labels. Pisces is an equatorial constellation, lying immediately south of Andromeda and north of Cetus.

It appears highest in the evening sky in the months around September. It is one of the faintest of the ancient constellations, containing no stars brighter than magnitude 3.6.

What God is Pisces?
Pisces is the fishes. In Greek Mythology, these two fish were Aphrodite and Eros.

Alpha Piscium is the third brightest star in Pisces and is made up of a pair of white dwarf stars in close proximity.

when can you see pisces constellation

Northern Hemisphere observers are able to see Pisces most clearly in early autumn. Visible: Between latitudes 90 degrees and minus 65 degrees. Best viewed: at 9 p.m. between Nov. 6 and Nov

, what stars are in the constellation pisces

, what are the major stars in the constellation pisces

, how to find pisces constellation 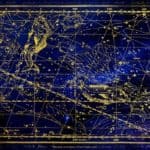 1917
The star was discovered by the Dutch-American astronomer Adriaan van Maanen in 1917. It has an apparent magnitude of 12.374 and is 14.1 light years distant from Earth. The star is located about two degrees south of Delta Piscium.

how many stars are in pisces constellation