Koi Fish Transforming into a dragon

1. KOI FISH MEANING AND MYTH-the world, koi fish are well-loved and respected. Often associated with Japan, koi actually originated from Central Asia in China. They were introduced to Japan by Chinese invaders.

The koi got their name around 500 B.C, but the fish itself has been around for much longer. Fossils of ancient koi date back 20 million years.

Natural genetic mutation brought about the brilliant colors in koi known today, and in the early 1800s Japanese farmers began keeping them for aesthetics.

Over the years, koi fish meaning and symbolism has become iconic around the world. learn more at https://koistory.com/blog/koi-fish-meaning-and-myth 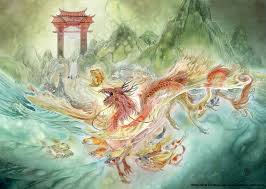 The golden river, so-called because of the golden colour of its water, was the last place where the inhabitants of the sea could swim freely, after the gods that walked on the earth had destroyed their massive home, Believing themselves to be the owners of everything they laid their eyes on.

Amongst all the inhabitants of their water, the Koi family were the most beautiful of all, gleaming in the sunlight like brilliant stars.

The black one was father Koi fish , the red one was mother Koi, and their little son was a remarkable deep blue colour.What the little Koi fish wanted more than anything was to reach the waters of the blue river after hearing from his father how there was a time where there were no barriers between one place and the other.

The bravest fish, the dragon fish, flew across the sky like pearls lighting up the darkness. The entrance was upstream, through the Dragon’s Gate to the Great Waterfall of the
blue river.

Every fish that got that far sprouted golden wings and so became a dragon fish. learn more at http://www.tuctuc.com/kimono/Files/LEYENDA-EN.pdf

3. Leaping Over the Dragon’s Gate-There is a Chinese proverb that goes “The carp has leaped through the dragon’s gate.” ( Liyu Tiao Long Men, 鲤鱼跳龙门 )”

According to Chinese mythology, the Dragon’s Gate is located at the top of a waterfall cascading from a legendary mountain. Many carp swim upstream against the river’s strong current, but few are capable or brave enough for the final leap over the waterfall.

If a carp successfully makes the jump, it is transformed into a powerful dragon. A Chinese dragon’s large, conspicuous scales indicate its origin from a carp. The Chinese dragon has long been an auspicious symbol of great and benevolent, magical power.

The image of a carp jumping over Dragon’s Gate is an old and enduring Chinese cultural symbol for courage, perseverance, and accomplishment. Historically, the dragon was the exclusive symbol of the emperor of China and the five-character expression,

To this day, when a student from a remote country village passes the rigorous national university examination in China, friends and family proudly refer to the “Liyu Tiao Long Men.”

More generally, the expression is used to communicate that if a person works hard and diligently, success will one day be achieved.”

– Carp Leaping Over the Dragon’s Gate learn more at http://www.egreenway.com/dragonsrealms/DT3.htm

4.Legendary Carp-Carp have a strange tendency to appear unusually powerful in fiction, often being gigantic. Giant Carp are venerated for being colorful and allegedly wise pond dwellers, especially in Japan. Sort of like swimming parrots.

They are known for their ability to jump many feet into the air and their long lifespan, something which is usually forgotten amongst their more domesticated, ill-kept brothers called goldfish.

According to legend, a sufficently old and powerful carp that is able to climb a waterfall may even become a dragon.

See Seahorses Are Dragons for another animal that turns into a dragon in Japanese Mythology.

Oddly, despite goldfish being a sort of carp, and supposedly being flushed down toilets on a regular basis, this myth rarely seems to cross over with the “giant alligator in the sewer” Urban Legend.

Probably because the carp has barbels which make it look more like an Eastern dragon while goldfish don’t…thus a goldfish won’t turn into a dragon at all.

See also The Catfish, a more elusive kind of fish. If you searched for Legendary Crap, you either want Blatant Lies, Toilet Humor, So Bad, It’s Good, or a page on the Darth Wiki that shall not be named. learn more at http://tvtropes.org/pmwiki/pmwiki.php/Main/LegendaryCarp

5.Carp and Dragons in Vietnam-There are a story in Vietnamese mythology that’s similar to the Chinese or Japanese story about the koi fish becoming a dragon.

There was an emperor who wanted to create new dragons because dragons bring rain, which helps crops grow.
So many animals in the ocean were summoned to have a competition, where they had to jump over three gates of rain.

The first animal that could jump over all three would get to be transformed into a dragon.First, a fish—I think it was a tilapia?—tried, but only got past the first gate.

The second to try was a catfish, but it hit its head on the second, so its head got flattened. The emperor rewarded it with dragon whiskers for effort.

Next came the shrimp, but it only got past the second, so the emperor made it look like a miniature dragon.Lastly the carp tried, and it got past all three,

so the emperor transformed it into a dragon.Because of this, dragons symbolize success and wealth, and education in Vietnam is compared to the three gates.—

An informant is a Vietnamese American and a member of USC VSA, and grew up learning about Vietnamese culture.The carp’s transformation into a dragon is a common motif in Asian mythologies,

with slight variations in each culture’s telling. It is also interesting to note that this myth has parallels to social function. read more at http://folklore.usc.edu/?p=24900

What does a dragon koi symbolize?
Dragon Koi Tattoo.
It is a bit like the black koi because there is a relation to adversity but it is also used to symbolize strength, courage, bravery to challenge the odds in order to create one’s own destiny and get reborn. It can serve as a symbol of rebirth

Do koi fish turn into dragons?
One particular legend is the koi fish’s claim to fame. … The gods recognized the koi for its perseverance and determination and turned it into a golden dragon, the image of power and strength. Undeterred koi are legend to have swam upstream China’s Yellow River

What does a dragon symbolize?
They traditionally symbolize potent and auspicious powers, particularly control over water, rainfall, typhoons, and floods. The dragon is also a symbol of power, strength, and good luck for people who are worthy of it in East Asian culture.

What is the meaning of a koi dragon tattoo?
Black symbolizes great adversity, the black koi fish is used to represent adverse struggle to succeed. It can be a story of rags to riches, a symbol of surviving a battle and coming out alive. Whatever hardships one has to go through to get to the point they are now can be represented by this tattoo. Dragon Koi Tattoo. learn more behind koi fish meaning tattoo meaning here